How The Devil Can Make Your Day Today!?

One is about new beginnings, The Self, leadership, action, being on stage, confidence, power, independence, goal-oriented, and innovative...

Today is a Day to take time out for yourself!. Spend some alone-time. Curl up with a good book, go to the movies (if you can), or Netflix! ...Spa Day anyone??

It's also a Day to look within, and work on oneself. This could be stepping into your own power, removing money blocks, getting rid of unwanted habits, or beliefs that no longer serve you.

The Tarot Card of The Day (COTD) is: The Devil Card! This is one of those Cards in Tarot that folks can see as scary and don't want it to come up in their Readings, especially as depicted in certain decks. The most familiar being from the Waite/Smith Deck.

After all, in the Waite/Smith version, a scary, bat-winged figure perches on a half-block, to which a naked man and woman and woman are chained! Looks ominous to me!

Of course this isn't the Devil at all. It's Baphomet, the Diety The Knights Templar were accused of worshipping, and subsquently were all arrested in France, on Friday the 13th, 1307.

Baphomet is actually just an amalgamation of different creatures. He has bat wings, as mentioned before, a human male torso, ram horns, a goat head, and taloned feet.

He has a pentagram, symbol for humans, and now magic & the occult, inverted on top of his head. The half-block he perches on is symbolic of only Half of The Story...

Also known as the Horned Goat of Mendes, he originally was about Balance - between Good & Evil, Humans & Animals, Male & Female, and so on, but has now become the scapegoat for everything "Evil".

He rasies his right hand in a Jewish blessing. Wait! Haven't we seen this before? Yes, of course - It's the Vulcan salute, from "Star Trek"! It was introduced into the series by Jewish actor Leonard Nimoy, who played Spock in the original series.

In his left hand he holds a torch. He lights the torch on the fire emanating from the man's "tail". This lets us see that Baphomet isn't real. That his manifestation and power actually come from Us, our own Fire (passions, emotions)!

A closer look, and we see that the two human figures are the same ones as depicted on The Lovers card. We can also see that the chains that bind them are actually loose around their necks, and they could easily slip them off and be free...

In the Llewellyn Deck version of the Card, "The Devil" is renamed "The Horned One", and depicts The Wild Herdsman, in place of Baphomet. The Horned One is also known as Cernunnos, the horned god of Celtic polytheism, often associated with animals, forests, fertility, and even wealth.

This Card is associated with what we are attached to. Addictions, the love of money, sexual obsession, bad habits, uncontrolled lust or anger, illusions and manic behavior. Feelings, such as being over burdened, resentful, feeling weighed down...

Sometimes The Devil card can show up when "letting our hair down", indulging, breaking the rules, having a little fun is exactly what we need! But more often than not, it's letting us know we have tied ourselves to something that may feel good, but isn't good for us!

The two takeaways here are that, 1.) we need to assess what we are tied to, and decided if we want to continue to be, and 2.) we have a Choice! Anything you are attached to you can choose to be un-attached to!!

The Horned One (Devil) card, from the Llewellyn Tarot Deck 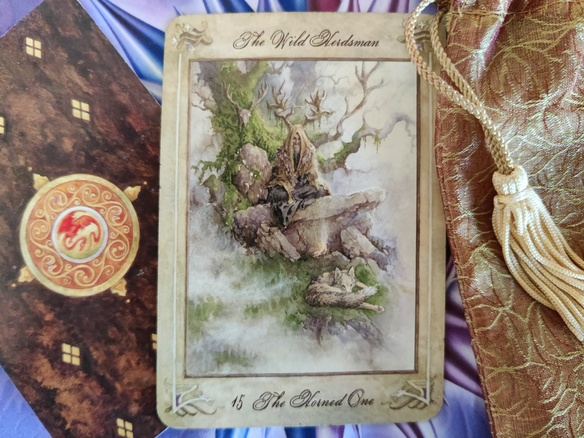 Do you have Life Questions? Need some Insight? Right now, you can Book a Private Tarot & Life Coaching Session with me for Just $67! (reg. $97) ...Which includes your Full Custom Numerology Chart & Report! ...Visit my Page at: TheTarotGuild.com/Dax

“There’s a Mantra for That!” Monthly Segment! 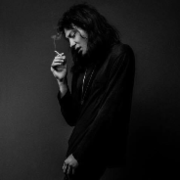